The most unsafe public transport in the world for women is in Latin America and the Caribbean. Four capitals in the region are among the six most dangerous. According to a survey of large metropolises by Thomson Reuters. Six out of ten women have suffered some type of harassment while on the move. So four capitals (Bogotá, Mexico City, Quito, and Buenos Aires) have decided to sit down to find joint solutions. This Thursday they signed in the Colombian capital. The creation of a network of Latin American cities committed to gender equality in transport. To which all those who want to join are invited.

Representatives from the four cities and the Inter-American Development Bank (IDB), a promoter of the initiative, participated in the Transport Gender Lab to share problems and exportable solutions with which to put an end to this phenomenon. “We have realized that the conflict is similar in the four cities. So the solutions of some can help the others,” explained Cristina Vélez, representative of the Bogotá Mayor’s Office. These are some of those that have been put on the table:

An SMS, An Alarm, And Telephone Assistance 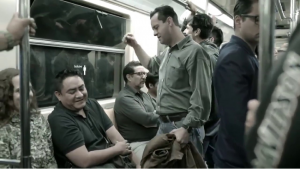 Just a few weeks ago, Quito implemented a simple system, but one that aims to change the culture. “One of the problems is that harassment is seen as normal. We have to end this,” says Thalía Bueno, from the entity that manages the city’s social programs. It consists of the harassed woman sending a mobile message (an SMS that does not require an Internet data program) reporting the harassment. At that moment, in the transport unit in which she travels. An alarm goes off that sends a message: “A case of harassment has just been generated, you must be attentive and respect those who are by your side. This is a safe space for women and girls.”

On the other hand, in an average of 58 seconds. An operator calls the affected woman to assist her: to find out if she requires assistance when she arrives at the station and if she wishes to file a complaint… not, above all, change mentalities. In two weeks of operation, we have collected 100 notices and three of them have gone to the prosecutor’s office, “explains Bueno.

This has been one of the most striking measures of the conference; cities such as Bogotá and Mexico have shown interest in it implementing them in their transport systems.

Both Mexico City and Bogotá have implemented applications for mobile phones that serve to report unsafe points, infrastructures in poor condition, poorly lit places, or areas where they have suffered harassment so that the Administration can have a complete X-ray of how and where the danger is. for women on public transport.

Thanks to all the information provided by these applications, mapping of the city can be done to concentrate efforts on the places of greatest risk. The representative of the Colombian capital explained. That this case reporting system allows photos to be sent where there are problems: “More than 100,000 images have reached us that allows us to prioritize lighting or accessibility resources, such as adaptation of trails, obstacles, uncut bushes ”.

Facilities For Women Near And Inside The Metro

“We know that the use made by men and women in public transport is not the same,” says Makieze Medina Ortiz, from the Women’s Institute of Mexico City. The habits that have been detected in the four cities. Show that they usually carry more loads (bags, packages). In general, the ones in charge of leaving the children (or the elderly) in care centers when they are on their way to transport public. For this reason, in Quito, where a subway is being planned, plans are also being made to adapt to the environment so that there are nurseries or day centers for the elderly near the stops. In Mexico, for example, they are trying to better integrate the bicycle system in the periphery to make it more bearable to carry pesos.

This city is also working to create facilities within the metro itself. Such as bathrooms for women and girls and nursing areas. As well as fighting for these areas to be respected by all users.

What does bad signage have to do with harassment of women? In Mexico, they have detected that when it stops to check indications is when it is most vulnerable and when it suffers the most attacks. Therefore, making good signage in public transport systems can help reduce aggression.

All four cities have emphasized the importance of infrastructure to improve gender equality in transport. In Quito, bus stations with exclusive lanes were “black boxes”, in the words of Thalía Bueno. The opaque walls made the women feel vulnerable, so they decided to make them all completely transparent. See and be seen. It is essential to increase security, so, along the same lines, good lighting also plays a key role in security.

Enabling cars exclusively for women is a measure that has been used for years in various cities around the world. Mexico, Brazil, Japan, Egypt, Malaysia, Thailand, India, Israel, and the United Arab Emirates are some of them.